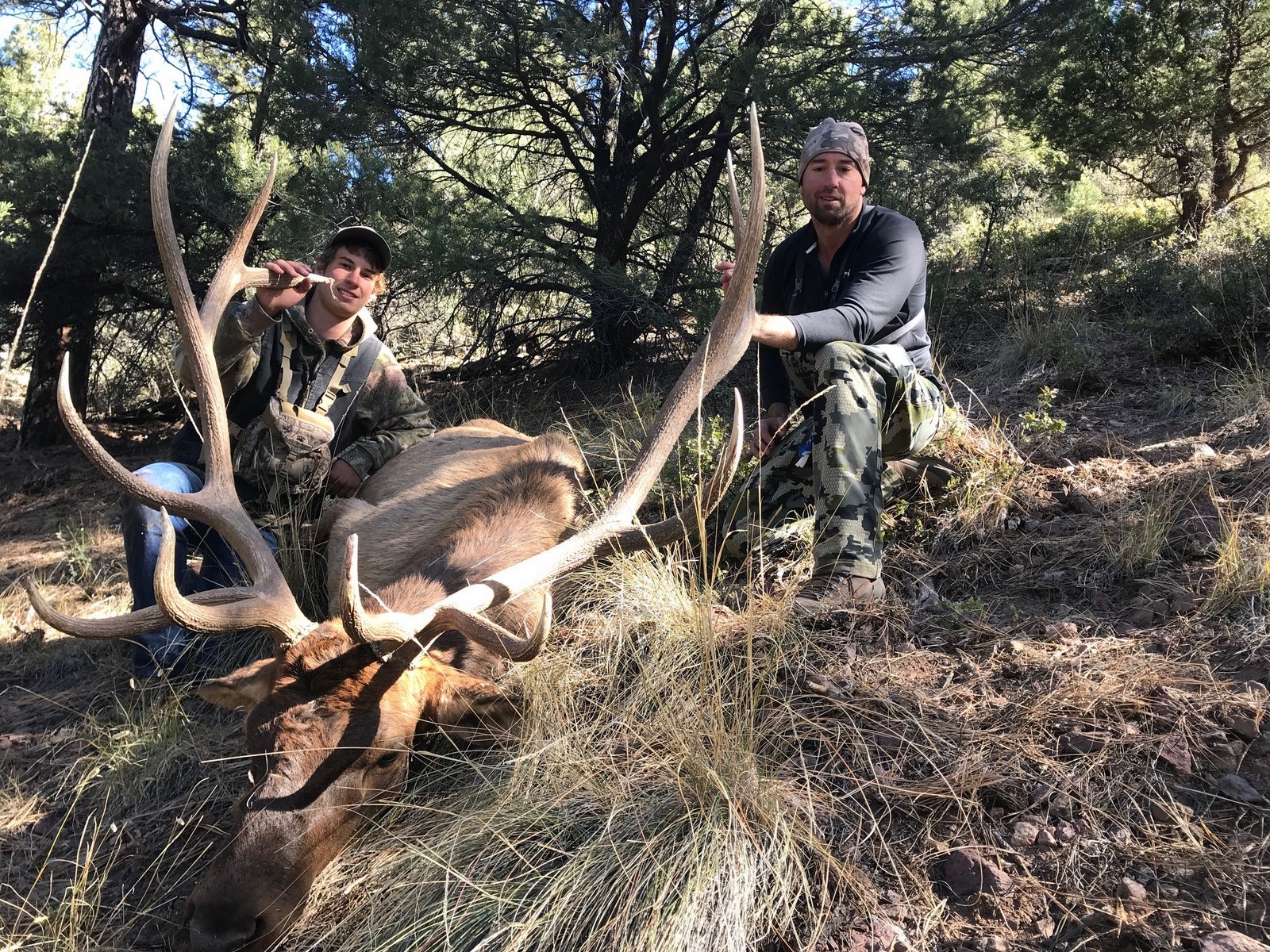 Hunting New Mexico could be summed up as the Mecca of Giant Elk and is a dream for many hunters As I studied the draw odds of New Mexico, I figured I’d choose a fairly easier draw for elk that is quite physically challenging in anticipation of a Grind of a hunt in some rugged country for some monster bulls. The time came and went after the draws, and my son Payton and I showed up six days before the season opener. As the first evening broke, we spotted only one cow in the vast territory. The late season hunt was already proving to be more difficult than anticipated.

The first scouting morning, we spotted five bulls with a big five that would go in the 320s, several bulls that had broken points, and one seven by with a broken main beam. Every day we would turn up good bulls but nothing over the 350 mark. We worked from north to south and east to west and searched every nook and cranny we could find. Most of the elk we saw were in the low-lying country, and we felt like we had no edge over the rest of the hunters.

As the first day of the hunt started, we were chasing the best bull we could turn up; a thin horned 350 class bull that I didn’t want to shoot, but was reminded by my 16 year old son that this was the best bull around. We climbed in the dark to where we saw this bull several days in a row, but as the sun broke, several ATVs riding the national forest two-track roads scared that bull. With no other sightings of him during our trip, I found myself relieved that I didn’t kill him. I wouldn’t have been happy with that, and its not the way I like to hunt, with others having the same edge as us.

Payton and I went back to what we know and what we are good at. We hiked 5 miles back into a high country basin with heavy timber on the north-facing side. We glassed for hours with no sign of elk, and with little to no water in the basin, we doubted that any elk called this place home. As we scanned the hillside, I found a mega heavy shed horn just over a mile away. My motto is never to leave a shed horn behind!! After I shed weight off my pack, I went to the spot the heavy horn bull called home. In amazement, I picked up this bull antler and saw only 40 yards away the same side antler from the year before. As I climbed through the rugged country, I picked up four more antlers. This country proved that it had not been seen by man in many years.

While on the long heavy pack out to Payton, I saw one small bull and several Mule deer, proving that there was some form of wildlife in this isolated canyon. As I was climbing up the hill, Payton came running down at me with an intense look on his face. He had found a giant, and the pictures confirmed. He told me that when I was walking through the thick country, I jumped the bull in his bed at a mere 20 yards. As he looked at the antlers on my pack, he said that was the bull he had seen. With the sunlight fading, we ran to a point in hopes of seeing this giant bull. There was no sight of the monarch on the mountain. I wondered if I had blown my chance at a huge bull because of my love of picking up sheds. Several hours hiking out in the dark provided good reflection and time to get the next days’ plan together.

We had a sleepless evening with the same 60 mph winds that had been blowing our tent and scattering our gear for days. The plan for the morning was to split up and to sit on different hillsides in search of the bull that we hoped was still somewhere in the country.  As I perched up in constant conversation with my Father, I prayed in specifics that we could find the giant and put him down with one shot. I do believe God cares so much for us that he grants the desires upon our heart, even those desires of a monster bull.  A lot of people don’t understand the constant and sometimes miserable grind of being uncomfortable in the wilderness, but I never feel closer to God than when I’m quietly sitting on a mountain top.

We glassed the country for hours, and I finally caught an antler moving through the timber. He was not the bull we were initially searching for, but after looking him over and seeing the 5 ft width on this giant, he was even bigger than the other bull, most likely scoring at least in the mid 390s. It took several minutes to range this bull as the sun was blaring in my eyes.  He was 361 yards, and I anchored down and squeezed the trigger on the Gunwerks muzzleloader but no bark.  Throughout the fumble, I forgot to put a cap on the muzzleloader, and the slam of the bolt echoed in the canyon as the giant ran into the timber and disappeared as fast as he showed up. As I shook uncontrollably and made the Gunwerks lethal again, I looked up and saw the original heavy horned bull in the exact spot where I screwed up on the wide bull.  It was a gift from God and a redemption of the last bull. This time, the muzzleloader found its mark, and the bull only made it 40 yards before tipping over.

As my son and I held the giant bull in our hands, I reflected on and gave thanks for a second change, and the privilege to spend time with my best buddy, Payton. I welcome the opportunity to pass down the torch, as Payton helped me pack out one of my animals instead of me helping him with one of his animals like we had done so many times before. I thank our Lord and Savior for these experiences, and for my son’s help during this hunt. I couldn’t have done it without either one of them.